Continuing from this post here, I’m going to continue blogging my experiences at linux.conf.au being held this year in Perth and UWA as a newcomer.

I actually managed to make the keynotes for this day, which was Kate Chapman’s talk on OpenStreetMap [ Video ]. The cool thing about linux.conf.au is that everything is being livestreamed at timvideos.us so when I was a little late, I could still stream audio in the car. Sweet! The keynote was really warm and fuzzy about open source doing great things around the world using OpenStreetMaps. It was a very accessible talk and has even inspired me to eventually try to contribute to OSM in some way, which is what a talk should do!

I spent most of the day at the Kernel UnConference. I know nothing about the Linux kernel, my general kernel knowledge spans only what was taught in the introductory university course however I, like a bunch of other students attending from Curtin, want to know more about what drives our favorite OSes. Most of what was being said went over my head and at times it seemed like the participants were speaking another language but I still think I managed to get something out of it. I think the idea of UnConferences is really great and definitely improves audience engagement though.

During lunch a bunch of us decided to go to Cafe Biscotti for lunch. This is relevant because it’s the first cafe in Perth to accept Bitcoin. Ironically, it’s a tiny cafe situated on the ground floor of Bankwest, which is part of the largest banking group (Commonwealth Bank) in Australia. Props to them for being the trendsetter in Perth (and for giving a 5% discount).

Returning to the conference, I took a break from kernel hackerspeak to see A Pseudo-Random Talk on Entropy by Jim Cheetham. As an introduction to the history and current techniques for random number generation this talk was pretty good, however it was a bit short (at only ten minutes) and I would have loved a more in depth look. Such is life with the miniconfs though.

Finally returning to the Kernel UnConference after afternoon tea, I got to see the highlight of my day as a panel of kernel developers answered questions from the audience including Linus Torvalds. It’s really cool to have one of your idols talking nonchalantly a few meters away from you, and is something I’ll definitely remember this conference by. 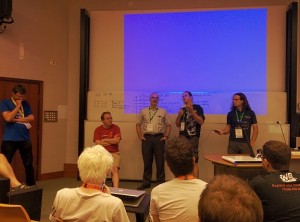 My linux.conf.au adventure is continued here.